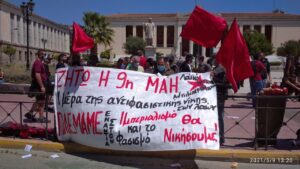 On 9 May 1945, at 13:00, the mass gathered in Propilia Square in Athens marched towards the Greek representation of the European Union. In front of the European Union, slogans were chanted that cursed imperialism and fascism. he then came to the Propilia Square, where the mass had gathered again, ending the action.
March on the Popular Front and Anti-imperialist front “Long Live May 9, the day of the people’s anti-fascist victory. We are fighting imperialism and we will defeat fascism,” he joined with a banner and moved the red filaments.

Down With Imperialism, Long Live Our Struggle. Their Slogans Were Chanted.

Imperialists, You Will Remember Every May 9,

As Long As There Are Socialists In The World, You Will Never Win!

May 9, 1945 Is Victory Day Against Fascism. Beginning with the invasion of Poland on September 1, 1939, the 2nd. The war of independence ended in victory on 9 May 1945 when the Red Army defeated fascism.

The Soviet Union Won The Victory, The Imperialist Countries Were Forced To Participate In The War In Their Interests!

76 years ago, on June 6, 1944, the imperialist countries went to Normandy. In European countries, this event is described as if the end of Nazi Germany began here, and is considered the day that ended the Second War of sharing.

It was not because of their anti-fascism that America, Britain, France and other imperialists resisted the imperialist Hitler Germany. At that time, when they saw that Hitler’s fascism had been defeated by the Soviet Union, they were in great fear. Imperialist interests, markets, and most importantly, exploitation schemes could be completely destroyed…

In this fear, they opposed Hitler’s fascism. In other words, if the peoples of the world sympathized with socialism increased, they would be out of their markets.

What is fascism? “It is the bloodiest, most chauvinistic dictatorship of the monopolistic bourgeoisie, the bourgeoisie.”That is, the imperialists’ own form of government. German monopolies have also supported Hitler’s fascism from the beginning.

The German monopolies, which came out of the first sharing war with defeat, needed new markets, so they took this war out. Or, as it is written in the history books of the imperialists, bishopric was not Hitler’s ‘ingenuity’ to slaughter millions of people, to invade countries… But those whose victory was justified, that is, the Socialists, won.

it’s distorted. The numbers are lies, the countries that won the victory are lies.

If you ask the people of Europe, the Americans saved them. The British saved, Churchill “what a great hero””!) but they admire him… Or, if you ask the German people,” the Russians are invaders, Stalin is like Hitler, he killed them.” This is how the imperialists wanted to place this war in the memory of their people, in their brains.

And so their people know about this war. But not everyone can write history, history is written once and for all.

History also tells us that fascism was defeated by the Soviet Union and its army, the Red Army. Stalin is the commander-in-chief of this war and has given victory to the people of Europe.

Hitler stopped his fascism on Soviet soil, in Stalingrad, in Moscow. The Soviet people and the Red Army resisted city by city, street by street, against fascism. 24 million Soviet martyrs were pioneers of the national independence of most of the world’s peoples and the national and class liberation of some of them.

The communists are always the pioneers and leaders of the resistance against fascism throughout Europe. The partisans of France, Greece and Yugoslavia are the honor of the peoples of the world in this war.

Petty bourgeois patriotic intellectuals also participated in this war to the extent that the communists spread resistance.

In imperialist countries and colonies, the people took care of the communists who resisted everywhere as their national honor, and took part in the resistance under their leadership.

Yes, May 9th is a victory day. The Soviet Union both saved its own country from occupation and stood in solidarity with the European and Balkan countries and did not allow fascism to win there. But today imperialism is still standing, and fascism will continue as long as it does not disappear.

The great victory of the peoples of the world will be when imperialism is completely destroyed.

And today we know that we will defeat fascism. There is no other way to do this than to unite, resist and fight against fascism.

We bow before all our martyrs who lost their lives in the struggle against Hitler fascism and against fascism all over the world.

First of May March held in Greece