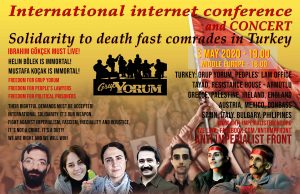 On Sunday May 3, an inter-access internet conference and concert on the theme of solidarity with the resistance was organised by the Anti-Imperialist Front.

The programme, which was attended by people and institutions from many countries in solidarity with the death fast resistance in Turkey, started at 19: 00 on Sunday evening. After the conference, which lasted until 21: 00, the programme was terminated again with the international internet concert.

About 17,000 people watched the conference live in the programme; from Greece, Italy, Bulgaria, Austria and Mexico there was participation by Anti-Imperialist Front components, as well as by the house of the resistance in Armutlu, Grup Yorum, the family of Mustafa Koçak, the People’s Law Bureau, anti-imperialist prisoner Şadi Özpolat, who is a member of the Anti-Imperialist Front in Greece, the European People’s Assembly, the Assembly of the European resistance, the Aramean People’s Assembly, Samidoun Solidarity Network With Palestinian prisoners  (Netherlands), Lawyers’ International Solidarity, Anti-imperialist Action Flying Column (Ireland), Filipino migrants in Austria, ILPS, MLPD (Germany), Banda Bassotti (Italy) and Alexey Albu from Borotba – Donbass.

Participants in the conference and concert offered their messages of support to the resistance of the death fast in Turkey, touched on the importance of inter-cultural solidarity and called on the Turkish state to accept the demands of the insurgents and stop the deaths.

Recording of the Internet Conference

Grup Yorum: We Won The Political Victory, The Whole World Heard Our Voices