“We’re in front of Kanuni Sultan Suleiman Hospital. Aytac is inside. He’s in the isolation cell of the hospital. He’s kept there by force.Upon the request for release by our colleagues, Aytac and Ebru were brought to the forensic medical institution. And though the report stated that they can’t remain in prison, that their life is at risk and without such a demand, they were taken to hospital by force. Both were brought to different hospitals. Aytac is now at Kanuni Sultan Suleiman hospital and Ebru at Bakirkoy*s Sadi Konuk Education and Research hospital. Now, they are in the isolation cell, under closed imprisonment. Visits are not allowed. I’m at the same time the wife of Aytac. As his wife, I couldn’t see him for that 2 days. There’s no legal reason for this. Also as his lawyers it is not allowed to visit him in these days. Actually, they try to prevent visits under the excuse of Corona at one side, and for two days they also cause big troubles regarding the companion. In order to get permission for companion by the temporarily prosecutor at his office, it took a lot of time. They had to battle with red tape. They had surely received an order, this happened consciously. They commit a crime, by prohibitting two days long both companion, families and lawyers to see a person on such an advanced stage of death fast that it is not able to meet even his own needs.
Actually, they keep them under continuous torture. Because every hour and minute that they’re kept here, they are under threat of forced medical intervention.
Yes, in this moment there is no intervention, because the doctors stated that they won’t do any intervention, not even examination, but they still keep him at the hospital based on the court decision. Of course this decision can be fought. We appealed against it.” 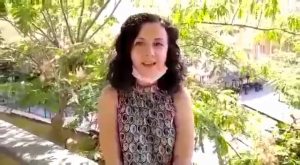 Father of lawyer Aytac Ünsal talked to his wife