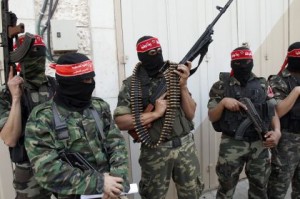 On Wednesday morning, the Palestinian resistance groups – the Palestine Liberation Army (PLA), the Popular Front for the Liberation of Palestine-General Command (PFLP-GC), and Fatah Al-Intifada – launched their counter-assault against the Islamic State of Iraq and Al-Sham (ISIS) inside the Yarmouk Camp after the aforementioned terrorist group captured half of this district in March of this year.

The Palestinian resistance committees – in coordination with the National Defense Forces (NDF) – stormed the terrorist group’s positions at the Lubya building located along Palestine Street, killing 14 enemy combatants from ISIS, while also destroying an ISIS hideout inside this dilapidated part of the Yarmouk Camp District.

Following their assault on the Lubya building, another contingent from the PFLP-GC and National Defense Forces carried out a powerful assault at the Yarmouk Girls School, striking the terrorist group at the northern flank before the Syrian Arab Air Force (SAAF) joined the battle with their intense airstrikes on ISIS’ positions; this site is considered one of ISIS’ bases inside Yarmouk Camp.

The Palestinian resistance committees are attempting to rid the terrorist group from the Yarmouk Camp District; however, this will not be an easy task for them, as ISIS is deeply entrenched in a number of buildings in the southern sector of the district.

Solidarity with ERDOGAN CAKIR ON HUNGER STRIKE IN FRENCH JAIL [FRA/ENG/GER/ITA/TR] WRITE TO HIM!!!

Statement from Palestinian prisoners in Israeli Jails: Intensify the flames of the uprising [ENG/ITA]