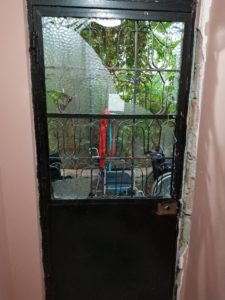 On the night of November 19/20, the law enforcement agencies of AKP fascism in Istanbul, Turkey sowed state terror in the small Armutlu neighbourhood.

They raided the resistance house of the death fast where the lawyer Aytaç Unsal is being treated and scattered his belongings about.

Aytaç Ünsal’s health has been threatened. Revolutionaries in Küçükarmutlu neighbourhood have been detained amid torture. Among them Ferhat Gerçek, who in 2008 was shot and wounded by the police while selling the Yürüyüş magazine, leaving him partially paralysed.

There is the Covid virus, we take precautions, we fight for the health of the people, AKP fascism is the enemy of the people, all the rhetoric aimed at the people is lies and demagoguery.

They fine people for going out in the street while those in Erdoğan’s Palace are rolling in money while engaging in empty rhetoric about public health.

The police raided the death fast resistance with hundreds of policemen holding heavy machine guns in their hands. Aytaç, lawyer of the People’s Law Bureau, recovering from the death fast, must be treated in a stable environment.

For all their supposed health concerns they are able to conduct an operation on the house where Ünsal is staying, enter and search with dozens of police, torture and detain revolutionaries and throw them into cells.

A few weeks ago, they published lists and said they had arrested about 120 people. Dozens of people have been infected with the Covid virus in the Vatan security department.

Fascism cannot talk about law or people’s health, when it can raid the place this morning where a lawyer who was on the death fast is being treated, make threats and seek to legalise fascism.

Your democratic rhetoric is hollow from beginning to end, we see very well what your gilded words mean in life and in practice. Do not try to deceive. We know the state very well.

In the face of your empty words, the revolutionaries will continue to tell the truth to the people.

”Not resisting wrongdoing is infidelity in this land,” said Yasar Kemal, in his Ince Memed novel, we too will not give in to this terror, we will not be afraid.

The crisis of AKP fascism and the system is deepening, victory has not been so close, but every day let fascism increase its attacks every day, it can kill, throw us in prison, detain us and torture us, but it can’t find a solution to its own internal contradictions and is bogging down in them.

The soft underbelly of imperialism is in Europe and in our country, it will not be able to get out of this crisis, our people will not be hopeless because there are revolutionaries as this crisis deepens, to organise the revolution.

Every week, an operation, an attack, yet victory is close, we will win.

Get Your Dirty Hands Off The Revolutionaries

We Will Not Bow To State Terror

Let The Detainees Be Released Immediately!

47 YEARS AFTER POLYTECHNIC RESISTANCE THE MEANING OF REBELLION STILL EXISTING

We are not only 120 people, You cannot break the millions and the People’s Front!