Share
Riot police officers have intervened the sit-in held by lawyers in front of Istanbul Court House, with riot shields and then tear gas.
Revolutionary Lawyers has gathered to make a press statement and protest the detainment of Lawyer Ebru Timtik, accused of demonstrating in front of the Austria Consulate General building.Following the press statement, police made an announcement and warned the group to disperse. As the group held a sit-in instead of dispersing, riot police officers firstly attempted to push the protesters with shields, then intervenes with tear gas.Some of the lawyers were manhandled and detracted from the scene by the police. Lawyers dispersed after the intervention.

Meanwhile, journalists in attempt to take footage of the police’s intervention was blocked by the private security and undercover police officers.

Lawyer Ebru Timtik had been detained while protesting the measures against her sister Evin Timtik by the Austria government who had seized sister Timtik’s passport and ID, in front of the General Consulate of Austria. 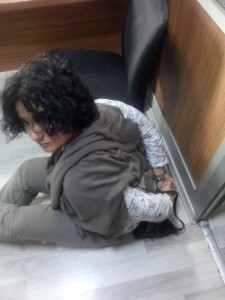 OUR COMRADE STEVE IS FREE!