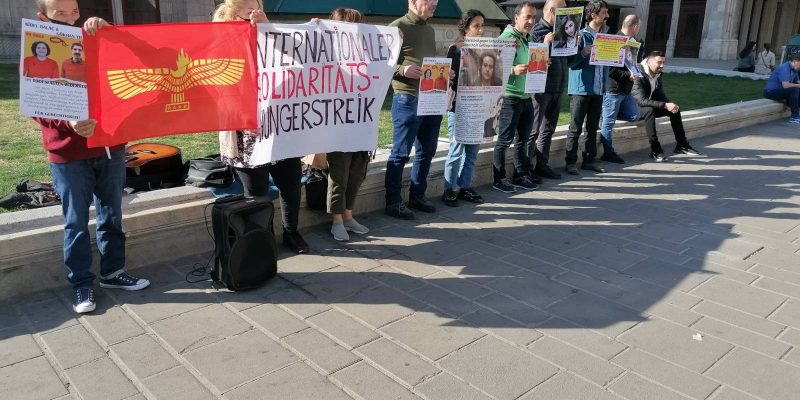 In Vienna, a sit-in was held next to the opera house between 2.00-5.00 pm to announce the death fast and support hunger strike. About 15 people participated in the action.
In addition to the banners and posters writing the resistance demands of Sibel and Gökhan, there was also opened a banner with the words “International Hunger Strike” in German, as well as posters of the imprisoned Dev-Genç (Revolutionary Youth) member Tuğçe Nur Özbay, who went on an indefinite hunger strike in support of the Death Fast, and of Zehra Kurtay and Sinan Ersoy, whose 30-day support hunger strike was completed today.

Questions why Sibel Balaç and Gökhan Yıldırım were arrested and why they were on a Death Fast, were answered on a large poster hanging next to the table where leaflets about the death fast and postcards were placed
Iranian anti-imperialists, a comrade of the Syriac People’s Assembly who support the Solidarity Committee for Political Prisoners, also took part in the solidarity hunger strike for Sibel and Gökhan.10:18

Support videos from all over the world on the day of solidarity with Sibel and Gökhan on March 27.