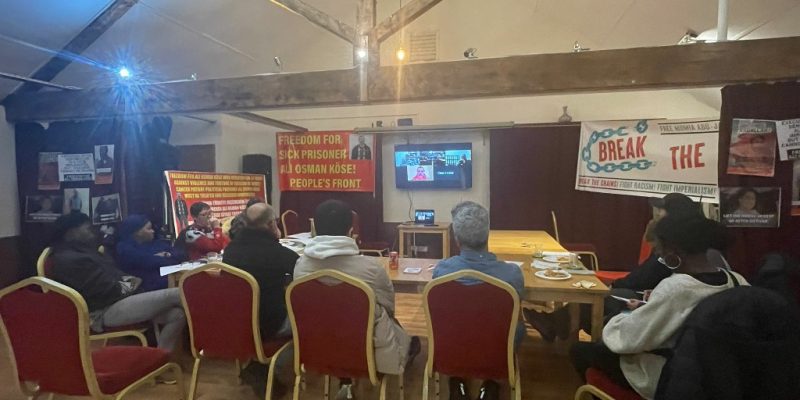 On the 40th anniversary of Mumia Abu Jamal’s captivity, a solidarity event with political prisoners was held in London on Saturday, 11 December 2021, as part of international events.

Aislinn from the Anti-Internment Group Ireland talked about the developments regarding political prisoners in Ireland.

Ayten Öztürk talked about the six months of torture and 3.5 years of imprisonment she lived through and talked about what kind of conspiracy she faces via video link. She spoke about the campaign she started.

Because she has been exposing the torture and injustices against her and because she
did not accept to be her own guard with house arrest, she talked about the conspiracy of the state in order to cover their torture. Ayten called for dismissal of the case in which she was tried with a double aggravated life sentence. It was discussed what can be done with the questions of the participants. Information was exchanged to embrace Ayten’s
campaign.

Speaking on behalf of the Free Mumia Campaign, Cecile called for solidarity to get the US president to pass their official motion and to secure the release of the seriously ill Mumia.

The representative of the Committee for Freedom for Ali Osman Köse called for unity to raise the voices of Mumia, Ahmad Sa’adat, Ali Osman Köse, George Abdallah and all political prisoners and to carry out effective and fruitful works as soon as possible. It was explained that we should act together with against all the institutions of imperialism
and put our differences aside and act stronger in unity in the face of the attack on the peoples.

Information was given about 11 revolutionaries who were imprisoned as a result of unfair trials in Greece and they were asked to participate in the campaign.

Again, it was explained how the people’s lawyers in Turkey were imprisoned by the state and how the state took steps to intimidate the people and leave them defenseless with this method of punishment.

The representative of the Revolutionary Communist Group explained that the call for unity should be taken seriously in order to carry out more effective work and stated that they would participate in all activities.

An online meeting was held on July 25 with representatives of Italian feminist associations and ...
By 1917soviet
July 28, 2022
Next Article:
December 11, 2021
min read
Social connect:
or