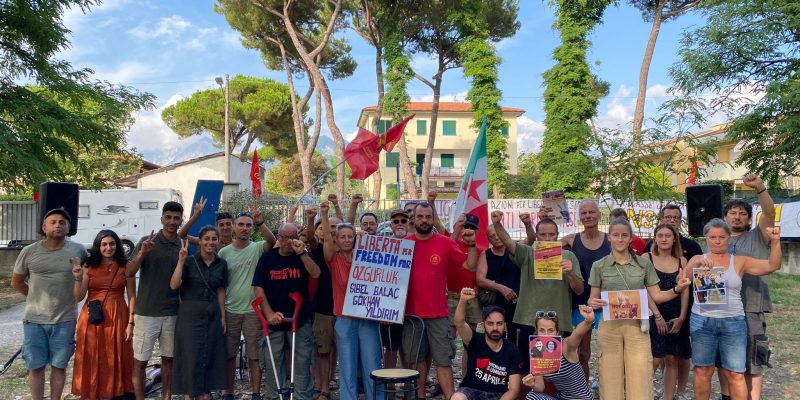 In Italy, the Anti-Imperialist Front held a panel at the summer camp organized by P-CARC. The panel was about 11 Turkish revolutionaries imprisoned in Greece and the symposium that the Anti-Imperialist Front has been holding regularly for 20 years.  A call was made for participation in the symposium to be held by the Anti-Imperialist Front in Greece on October 7-8-9 this year. In addition, the ongoing death fast resistance of Sibel Balaç and Gökhan Yıldırım in Turkey was mentioned.
Konstantina Kartsioti from the Anti-Imperialist Front in Greece, Liliana Ciorra from the Solidarity Committee for the 11 in Italy and Andrea di Marchis from P- CARC took part in the panel as speakers.
The speeches emphasized the importance of international solidarity.
Liliana Ciorra talked about the unlawful house arrest of Ayten Öztürk. Burak Ağarmış from the Free Prisoners in Greece participated in the panel. There was a question and answer session and a conversation with the participants.
On the same day a Grup Yorum concert took place. The panel started right after the concert and about 50 people attended.
At the end of the speech, everyone was  again invited to participate in the symposium and solidarity videos were shown for the trial of 11 revolutionaries from Turkey to be held on November 16th and for the death fast. After the solidarity videos, the Anti-Imperialist Front, together with Grup Yorum, taught everyone there how to dance the halay, and the panel ended with halays being danced.
International Solidarity is the Strongest Weapon of the Peoples
Release the 11 Revolutionaries from Turkey
Long Live Our Death Fast Resistance