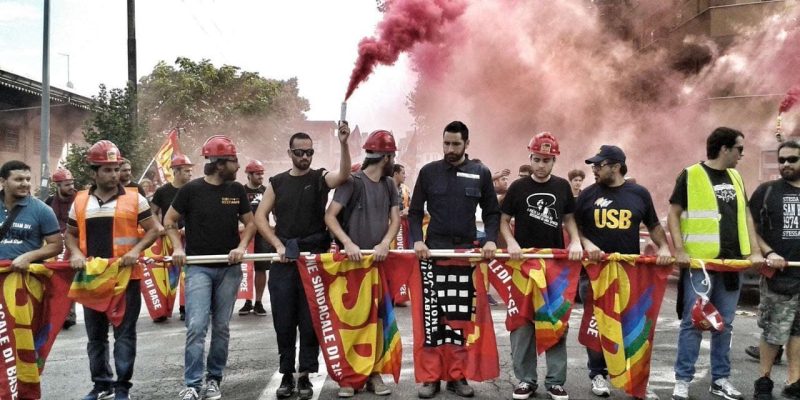 The fight does not stop!

The recent arrest of the trade unionists, in addition to arousing indignation, must push us to analyze this event a little more in depth.

As a premise it should be noted that in every country the administration of justice operates on rules that have historically been determined in the clash between classes.

As for Italy, since before Fascism a political criminal proceeding was never opened without the approval or contribution of the political leadership, indeed if there was some too subjective initiative it was always quickly censored.

That said, it is important to understand the political link of this operation.

To understand this, it is necessary to start with the leap in quality of the Italian government made on February 13, 2021 with the entry of the highest quality personnel of imperialism, namely Mario Draghi.

The leap in quality has been seen above all in the management and in dealing with problems.

Regarding this analysis, Draghi, among the various mobilizations that undermined his action, found himself moving in a situation of effervescence of workers’ struggles in logistics, with autonomous and fierce trade unionists and a sharp decline in the authority of the unions.

To rebalance the perception of the masses, the first intervention was aimed at relaunching the CGIL and exploiting the participation of the right in the NO Green Pass movement, it was allowed to go wild on the Corso d’Italia headquarters. But it was not enough that the CGIL was attacked by a group of mafia members, for the action to take effect it had to be clearly signed. And coincidentally, the Forza Nuova executives, who usually refrain from being too close to the clash points to spare themselves any complaints, were all at the forefront that time.

And here the CGIL becomes the champion of anti-fascism and regains authority. The first part of the work was successful.

For the second part it was necessary to find the right moment for the blow to be well aimed and at the same time not arouse feelings or solidarity. And what better time than when summer, war and political crisis have overlapped. Another blow, with the attack on the Piacenza grassroots trade unionism.

We report that in both cases things did not go smoothly for the regime. In the first case, the open unleashing of the Forza Nuova fascists led to their subsequent expulsion from the NO Green Pass movement, which they had driven in many cities until 9 October.

In the second case, the investigations for conspiracy against USB and SiCOBAS in Piacenza produced a compaction and a unified response of the two unions, which was impossible to say the least before this repressive operation (between the two unions, in fact, a state of relations characterized by a unbridled competition between one trade union and another).

Correctly analyzing the events, understanding the motivations of the enemy’s maneuvers and his weak points helps us to get out of the logic of shot for shot. It allows us to understand how those who govern the situation and its developments move and will move, to regain the right autonomy necessary to develop our projects by leveraging the enemy’s weak points, mainly his inability to face the resistance movement that spontaneously develops and continues to develop in response to the effects of the crisis.

We are “not only eleven” because we do not want to deal only with the 11 prisoners in Greece, like all those who do not like to live in this regime we want to go beyond the pursuit of the bourgeoisie on all the obstacles it places before us. We want to keep up and stop the bourgeoisie from making more arrests like the Turks in Greece and trade unionists in Italy, so we don’t have to stop on the surface, but dig deep.