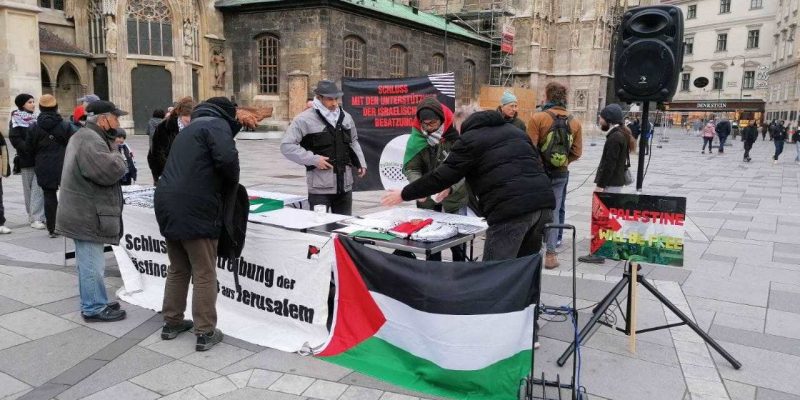 Today a solidarity action was held in Vienna’s city center to protest and denounce the ongoing killings and injustice against the Palestinian people. The Israeli military not even stopped its attacks during the traditional Eastern celebrations and again raided places belonging to different religions. In the last days dozens Palestinians were killed by Israeli forces.

The Antiimperialist Front spoke about the injustice Palestinian people are confronted with in their own lands and the one sided military and ideologically support to Israel. In the end of the speech, there was also mentioned the great example of international solidarity expressed by political prisoners for the death fast resisters in Turkey, Sibel Balaç and Gökhan Yıldırım, with a one day hungerstrike. It was stressed that besides other international prisoners also Georges Ibrahim Abdallah joined this solidarity hunger strike today.

An online meeting was held on July 25 with representatives of Italian feminist associations and ...
By 1917soviet
July 28, 2022
Next Article:
April 16, 2022
min read
Social connect:
or