This is an overview about the situation around the death fasts for fair trials of the 2 lawyers Ebru Timtik and Aytac Ünsal in Turkey, who are recently subjected to the threat of forced medical intervention and unlawfully kept in prison despite risk of life, registered by the forensic medical istitution. 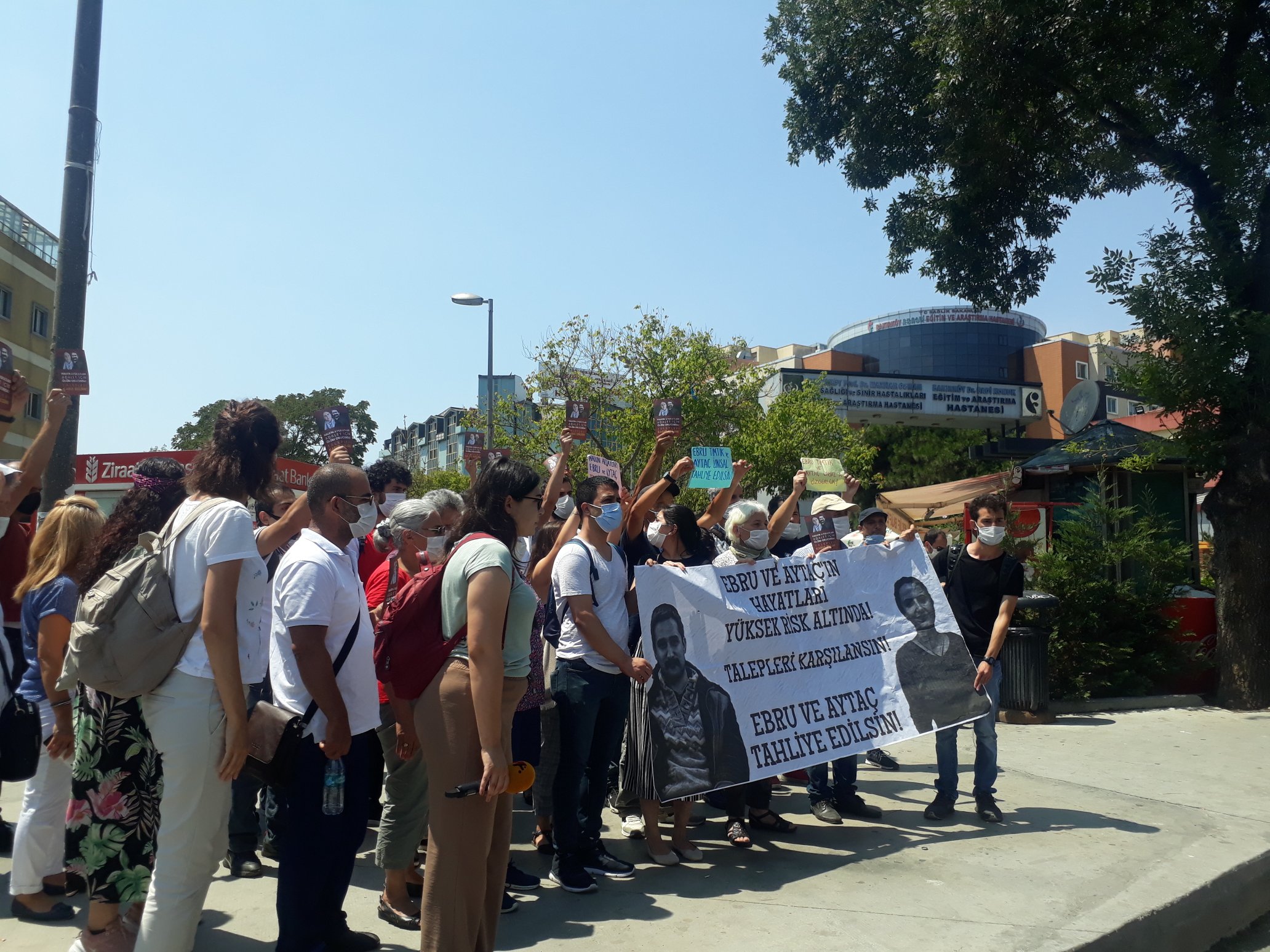 17 lawyers of CHD and People’s Law Office have been arbitrarily arrested for pracising their professial activities. No proofs, no legal basis could justify the charges against them.
The reason for the political power in Turkey to target them, was because they were the lawyers of killed Soma miners, of Berkin Elvan, of Nuriye and Semih and advocated all relevant societal struggles for democratic rights in Turkey. Their legal offices were raided, plundered, the lawyers were arrested and kept in jail without any trial for 1 year. When a court ruled their release, the court panel was immediately deposed and replaced with another, which ordered 159 years prison for 17 lawyers. Recently there are 10 lawyers imprisoned. Two of them, Ebru Timtik and Aytac Ünsal have been on hunger strike since the beginning of the year to demand fair trial and protest intervention to the jurisdiction and violations of law.

**
Lawyers Aytac Unsal and Ebru Timtik were taken to hospitals in Istanbul, against their will, for forced medical intervention.

The lawyers Aytac Unsal and Ebru Timtik, who are starving to death since the beginning of this year with the demand for a new fair trial are recently in two different hospitals under threat of force feeding. When the pressure against the injustice and polticial arbitrariness grew upon the life risk for the death fasters, the competent court (37th High Court) accepted a request of lawyers to examine their eventually release according to examination at the forensic medical institute.
While the time was running and colleagues, families, clients started to gather in front of both institutions a few days ago, the authorties acted very slow.

However, this medical report was ignored by no other than the 37th Assize Court, which has that ordered the injust and unlawful verdicts against 17 lawyers (159 years in total), just 10 hours after they had been released by another court ruling that the activities, they were charged for, were in the scope of their legal profession.

Though the forensic medical report registered that none of the hunger strikers was able to meet needs on their own and aren’t suitable to stay in prison, that court made another unlawful and political decision and ruled the continuation of detention.

Further the court has ruled that “a document shall be written to the İstanbul Chief Public Prosecutor’s Office so that the necessary can be done to urgently ensure their medical follow-up and treatment in hospital conditions.” As it was correctly commented by the People’s Law Office- International, “with this decision, not only continuation of arrest was ruled by the court, but also their directives are now force-feeding, hidden behind the vague terms of ‘medical follow-up and treatment’. Thus, the court ruled openly for torture to Ebru and Aytac with force-feeding”.

The lawyers were taken to two different hospitals in Istanbul, with a distance of approximately 20 kilometres from each other.

This happened only 2 hours after the court decision to extend the detention of the lawyers and their possible subsequent hospitalization for ′′ treatment ” on the 30th July 2020, the last day before the Bayram (official holidays in Turkey).

The lawyers of the People’s Law Office reported that Aytac Unsal was taken to Kanuni Sultan Suleiman hospital located in the southwestern area of Istanbul.

Lawyer Ebru Timtik was taken to Dr. Sadi Konuk hospital in the Bakirkoy area, about 10 kilometers from the city center, in the European part of the metropolis.

The distance between two hospitals, where two lawyers delivered for forced medical intervention, makes it difficult to move the relatives and colleagues of Aytac Ünsal and Ebru Timtik, as well as people who want to show their support, stand up and, ultimately, stop attempts to compulsory medical intervention against two lawyers who were starving to death for months for their right to a fair trial.

Colleagues, families and clients of Aytac and Ebru since then gathered in front of both hospitals. In social media postings videos were published, showing Ebru Timtik on a stretcher surrounded by police, while they tried to prevent people from taking pictures of her. Their colleagues commented on social media that it was torture to transport her in an ambulance car for several hours, though she only weighs 35 kilograms.

The same evening lawyer Aysegül Cagatay from the People’s Law Office as well as a deputy from the Democratic Party of the People’s Dilsat Kambaz Kaya released a video stating that despite the original promise of the doctors of Dr. Saadi Konuk hospital in Bakirköy, Ebru Timtik’s aunt had to wait permission by the prosecutor for staying with her as attendant.
Let’s remind, Ebru Timtik, who had 90 kilograms before the hungerstrike, now only weighs 35 kilograms. The medical report also stated that she wasn’t able to meet her elementary needs.
She spent already 2 nights there under threat without any lawyer or relative at her side.

It was also stated via social media account by the People’s Law Office that the mother of their colleague Aytac Ünsal, Nermin Ünsal was able to enter hospital after negative covid test. Yet, there haven’t been published details about the situation at Kanuni Sultan Suleiman Hopsital.

It was announced short time ago (August 1, 2020, 11:45 local time) that Ebru Timtik’s aunt could enter hospital after 2 days, but was refused to make phone calls and in case she would go outside, she had to make another covid test. So, this is why people waiting outside do not have yet information on her Ebru’s situation.

The latest known information received last night is that Ebru Timtik’s lawyer has categorically denied any medical intervention. At first, doctors told the gendarmerie to take her back to prison, but after the prosecutor’s order for forced hospitalization, she was moved to one of the hospital wards. According to unconfirmed information, blood samples were taken from Ebru Timtik, various indicators such as blood pressure, pulse and others were measured.

Both during the night and at this time, relatives, colleagues and many people supporting the justice fight for the two lawyers remaining near the hospitals, where Aytac Unsal and Ebru Timtik are kept by force. No information was received throughout the day about their current health status. Their fellow lawyers are doing their best to ensure that the court’s decision on their forced hospitalization is lifted and at the same time attempts to allow the relatives of both lawyers to take care of them during their hospital stay. Efforts continue to prevent possible compulsory medical intervention against two lawyers.