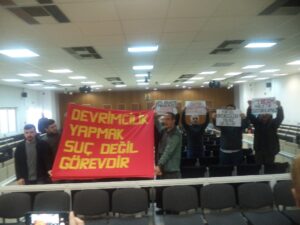 On March 19, 2020, revolutionaries from Turkey in their houses in Athens, Greece and at the Solidarity Association with Kurdish and Turkish Political Prisoners, which has been operating for 30 years, were raided in the morning by anti-terror police and Special Operations Police wielding long-barrelled rıfles.Our comrades were dragged along the ground, hit with gun butts, gas bombs were used on them, and they were detained under torture.
Veterans of the death fast were dragged on the ground while handcuffed behind their backs.
26 of our comrades were detained and 11 were arrested. Arrested comrades face an 18-month indictment – they are being held without preparation, the file was prepared only this month and on July 2, 2021 the first trial session will take place.
Anti-terror police in Greece after the operation published photos seeking to present our comrades as “suspect and terrorist” before the indictment was even prepared.
The Greek police, trained by the CIA, are no different from the torturer killers in Turkey and have shown that they are not. Everything from computers in the association to personal money was taken.
Our comrades have been held separately from each other in different prisons in Greece.

We Are Not Terrorists, The Imperialists And Collaborator Governments Are The Terrorists

Revolutionaries have been the honour of the peoples for centuries. The real terrorists are
a handful of monopolistic bourgeoisie exploiting their labour, plunging the peoples into hunger, blood and tears, as does the system the bourgeoisie perpetuate.

Neither Greece nor Turkey are independent the rhetoric of independence is a huge lie – both of them are neo-colonial countries dependent on imperialism in the country and the Great Middle East Project of imperialism that wants to use them for its logistics and other projects, exploiting the labour of workers and transforming their countries into American and NATO bases.
Peoples are brothers and sisters to each other, our real enemies are the bourgeoisie who rule us.
Greece and Turkey hold each other’s hands behind closed doors even while talking loudly about war and using rhetoric about foreigners. Yet they sign agreements with one another, none of which are in the interests of the peoples.
They seek to boost the profits of the imperialist masters and also their own profits.
Mitsotakis and Erdogan met after the NATO summit in Brussels last month and relations between their governments have improved further.
If America sneezes, they will be sick, their only concern is to benefit their bosses and Marxist-Leninist revolutionaries are their only fear, so they attack and jail them.
187-A and all such laws are garbage, as shown by Marxist-Leninist revolutionaries.
With laws such as these they seek to put an end to revolutionary and democratic people in Europe, make the revolutionary struggle surrender and use these laws to try to criminalise revolutionaries and present them as terrorists.

Turkish Interior Minister Suleyman Soylu said after the operation, “we are following it – we gave information and the operation took place,” he said.
End operations based on cooperation between Turkish and Greek intelligence organisations!

Our call to the peoples of Greece and Turkey
– 11 Turkish and Kurdish revolutionaries are to appear in court on July 2, 2021.
We are calling for solidarity. This court is one in which revolutionaries will render judgment on the imperialists and their collaborators.
With the power of this court and the ideological robustness and correctness of Marxism-Leninism,
it is a court where imperialism will be defeated.

End Terrorism Laws And Agreements Between Greece And Turkey And Operations That Arise From Them!
Our Revolution Will Shake The Whole World From Anatolia!
Down With Imperialism And Its Collaborators, Long Live Our Struggle!

Freedom For The 11 Revolutionaries From Turkey!