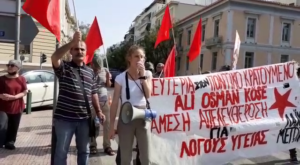 The Freedom for Ali Osman Köse Committee of Greece carried out an action for the freedom of Ali Osman Köse in front of the Turkish Embassy in Athens.

A one-day hunger strike was held internationally on June 25, 2021, to support Ali Osman Köse. More than 16 people participated in the hunger strike in Greece.

On the day of the Freedom for Ali Osman Köse hunger strike, a banner reading “Let Ill Prisoner Ali Osman Köse Be Released Immediately, Let Him Have The Right To Treatment” was unfurled in the action in front of the Turkish embassy, and statements were read out.

“Isolation is torture and it is a method of torture used on political prisoners all over the world. George Ibrahim Abdallah, Mumia Abu Jamal and Ali Osman Köse are examples of this. They have been in captivity for many years. They have also been held in isolation conditions.

They want to use the isolation policy to kill sick prisoners, we will not allow this, we are on a one-day support hunger strike on this issue,” according to a statement read out at the protest.

During the action, the slogans “Freedom For Ill Prisoners, Release Ali Osman Köse, Revolutionary Prisoners Are Our Honour, Revolutionaries Are Not Terrorists, It Is Imperialists Are Terrorists” were chanted.

Trial Of 11 Revolutionaries From Turkey Jailed In Greece Begins