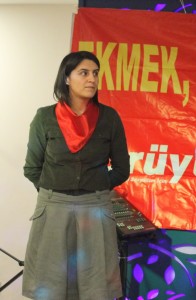 THE MURDEROUS AKP POLICE ARE TRYING TO MURDER REVOLUTIONARIES IN GAZI NEIGHBOURHOOD! THE MURDEROUS POLICE HAVE WOUNDED OUR JOURNALIST EBRU YESILIRMAK IN THE COURSE OF THEIR ATTACKS!

For several minutes they made the ambulance wait, while our journalist was bleeding heavily, and dozens of special police cars and armoured cars kept the area under siege..

Our journalist was finally taken to hospital in a police armoured car, gagged and with her hands handcuffed behind her back.

The AKP is attacking our democratic institutions, and is trying to make it impossible for our people and the revolutionaries to walk in the streets. Our journalist emerged from the magazine office and was then subjected to a gun attack. She was made to wait for an hour while in a wounded condition and nobody could enter the area. The AKP’s murderer police, ARE OBVIOUSLY TRYING TO KILL, both by firing on people as they emerged from a vehicle and by preventing our wounded journalist from being taken to a hospital!

They will try to legitimise what they do with demagogy about terrorism and claim that a clash broke out.

Yuruyus magazine has been raided twice in the past two months. Our journalists were attacked twice while returning from the printers’ and Durukan Adiyan was detained and the imprisoned. Today our journalist was wounded by the police in an armed assault, the ambulance was obstructed and they were openly trying to kill her. Despite all this repression we workers for Yuruyus magazine cannot be intimidated, and if we are murdered by you there will continue to be more of us. You have wounded those who sell our publication and left them handicapped or if that were not enough you imprisoned Engin Ceber and then killed him under torture. But over 30 years all this repression could not silence us, nor will your plots and massacre attempts achieve this. We will continue to defend our democratic positions and give the people news even at the cost of our lives.

YURUYUS MAGAZINE IS THE PEOPLE AND CANNOT BE SILENCED!

EBRU YESILIRMAK IS OUR HONOUR!