With the attacks on the early morning of 12 September, the AKP fascism took nearly 70 people in charge and detained them under the name of DHKP-C operations. All of the People’s Front members detained were taken to so-called courts; the prosecutor, without even dismissing any of them, referred all defendants to courts, with taking no defence statements, by the request of detention. And of course the judges of fascism played their roles without omitting and detained everyone they see without considering who is aged, sick…

By the operation taking at least 24 people in charge and raiding numerous houses on the morning of 6 October, the compradors of imperialism tried to judge the Anti-Imperialist Front that the People’s Front raises its struggle against imperialism with it. 5 of our friends were detained due to participating to the activities abroad in different times.

The offences that charged reflect the fear of AKP, the most important ally of imperialism in the Middle East, from peoples of the world and revolutionaries.

According to the AKP fascism, attending to the Humanité Festival, organized by the French Communist Party and visited by 2 million people, is an OFFENCE!

Visiting Democratic People’s Republic of Korea, which opens its doors to peoples of the world twice a year, is an OFFENCE!

Going to Damascus to support the resistance, which could not have been defeated by imperialists for 6 years, is an OFFENCE!

Participating to one of the biggest symposiums in the Middle East, International Symposium against Isolation, which was held in Lebanon, is an OFFENCE!

Participating to the symposium of People’s Unity against Imperialist Aggression in Turkey is an OFFENCE!

Taking part in the day by day growing Anti-Imperialist Front, which calls peoples of the world for a unity against imperialist aggression, is an OFFENCE!

The hostility of fascism against peoples is so big that individuals having registered jobs, studying at universities, being everyday at courthouses as lawyers detained at night time due to going abroad to make contacts for the organisation.

According to AKP the offence list of peoples is so long… They will almost charge and detain us, peoples even for breathing! 66 people in a month were detained by a case file built upon the statements of a traitor who just wants to save his own life.

Our call is to peoples of the world, against the compradors of imperialism charging Anti-Imperialist Front as an offence…

Fascism is attacking to the most resistant parts of the people in Turkey. It ruthlessly detains revolutionaries and individuals from the people who support and believe them. The soldiers of imperialism and Zionism try to destroy the AIF by the operations done. And the only evidence at their hands is the sealed stamps on passports by their own officials!

We are saying again: Wherever is it seen that peoples are withdrawn because of an operation done by fascism…

Wherever is it seen that the struggle is ended with the imprisonment?

The bases of the USA set around the world surely have a reason! The expansions of imperialists by robbing from all peoples of the world to the areas corresponding to the lands of DPRK surely have a reason! They were detained because the AIF is the only power against the exploitation of unorganised and hopeless peoples! The AIF, which is tried to judge by fascism at its courts, is the only hope of peoples of the world. Because the AIF, which is oppose to the policy of imperialism using even the smallest differences to set people fighting with each other, continues to its activities with the aim of mutual struggle together with the widest sectors against imperialism.

It continues to its solidarity acts and visits with peoples and resisters being the targets of imperialist aggression in the face of elimination policies with isolating organizations and countries all around the world.

The compradors of imperialism cannot stop all around the world the voice of political prisoners, the revolt fire coming from guerrillas and even a rock threw by peoples to the common enemy!

The attacks of the AKP fascism, the loyal comprador of imperialism today did not stop us and will not… This attack once more clearly shows that imperialism wants to destroy every resisting power! However their power is not strong enough to that. The existence of the AIF is their biggest fear! Because even we do not have tons of weapons, we have rocks targeting imperialism… We have the heritance of class antagonism of peoples of the world! We belong to the tradition of Spartacus, Parisian communards, Soviet people, Pir Sultan from Anatolia. They cannot destroy the hope with imprisonments, which they could not destroy even with killings. Because our voice is on the mountains of Colombia, in the Korean peninsula, in Balkans, in Anatolia, in Palestine… They cannot stop the fire of resistance with these attacks! We will continue to fight against imperialism and will continue to grow the AIF!

We will not be victims but executioners of imperialism!

Imperialism will be defeated, resisting peoples will win!

Being an anti imperialist is not an offence!

Go USA, these lands are ours! 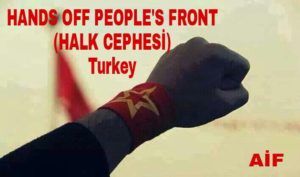 You will see us everywhere! – Thesselonike