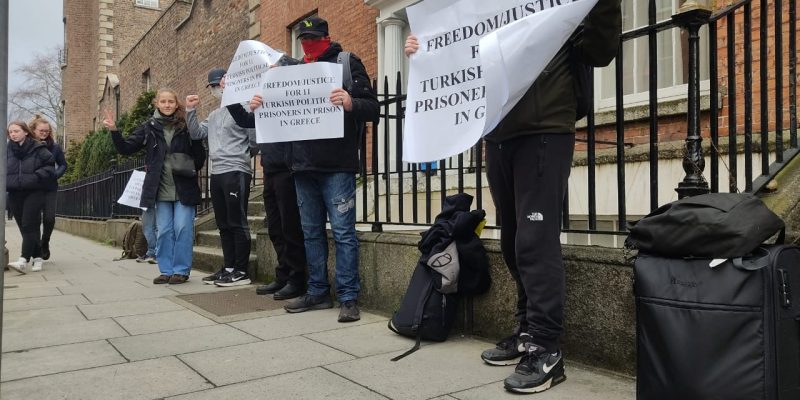 The voice of the demand for justice for fair trial and exposure of the lawlessness of 11 Turkish Revolutionaries, who were sentenced to a total of 333 years in prison as a result of an unfair trial in Greece, is in Ireland.

Irish people participated in the action held in front of the Greek Embassy. In the action where slogans in English and Greek were shouted, the injustices of Greece were explained to the public and they were asked to stand up for their demands for a fair trial of the 11 Revolutionaries.

At a meeting attended by the representatives of the institutions in the evening, the events before the operations, the injustices in the lawsuit process and the next process were explained.

After discussing the importance of international solidarity and what these attacks mean, it was decided that we should act together in the next process, and that the demand for justice of 11 prisoners in Greece should be explained to wider circles, together with the sharing of updated information.

The meeting was ended with a call to repeat the solidarity displayed by the Irish people during the 2000 Death Fast.

8th day of the long march!

Program of the Festival for Justice and the Fraternity of Peoples (18-19.2.)