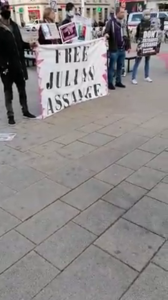 The Freedom campaign for Whistleblower Julian Assage who is currently imprisoned at Belmarsh prison in the UK and threatened with extradition to the US, continues on international level.
The campaign for the freedom of Julian Assange is continuing in Vienna with a vigil on a weekly basis since beginning of January this year.
The trial against Wikileaks founder is considered as a severe attack on press freedom and a dangerous tool against speaking out the truth and revealing war crimes.
The trial against the whistleblower Julian Assange is coming to an end. What is tried is actually investigative journalism.
On 11th of November the plea of the prosecution will be read and on 9th of January 2021, a decision shall be taken about Julian’s extradition to the US, where he would be confronted with an unprecedented espionage case. Assange has been charged with 18 offences that carry a maximum penalty of 175 years in prison.
The video and photos from 21-10-2020 give impression of the weekly solidarity action at the Omofuma human rights square in Vienna.