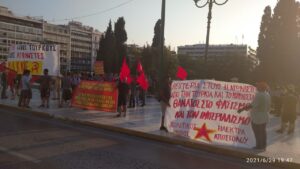 Freedom Action for 11 Turkish Revolutionaries in Front of the Greek Parliament
On 29 June, with the call of the Committee of Solidarity with 11 Turkish Revolutionary Prisoners, the Freedom for 11 Turkish Revolutionaries action was held in front of the Greek Parliament.
In the action, banners reading “Making Revolution is Not a Crime, It Is a Duty” were unfurled and red flags were held.
Voice calls were made throughout the action and a call was made for the hearing, which will take place on July 2nd.
Greek and Turkish “Liberty to Revolutionary Prisoners,
Making a revolution is not a crime, it is a duty, the slogans of “The real terrorists are imperialists” were chanted and leaflets for the hearing to be held on July 2 until the end of the action were distributed.
Democratic mass organizations and leftist organizations in Greece participated.
Approximately 100 people participated in the action.

Making Revolution is not a crime, it is a duty. The real terrorists are the imperialists!
Freedom for 11 Turkish Revolutionaries!
July 2 at 12:00
In front of Koridallos Women’s Prison – Athens 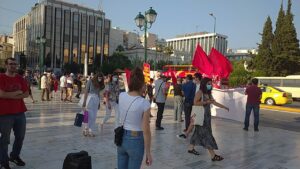 2 July- Court of 11 Revolutionary of Turkey in Greek prisons