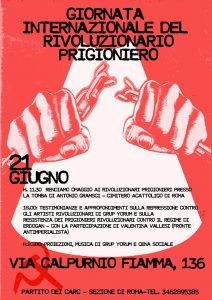 Revolutionaries and Communists around the world celebrate International Prisoner Revolutionary Day on June 19 to commemorate the revolt of Peruvian political prisoners smothered in blood by Alan Garcia’s Social Democratic government on June 19, 1986.
On that day the Army and Navy killed, amidst bombing and summary executions, about three hundred comrades and companions of the Peruvian Communist Party. The massacre took place in the prisons of El Fronton, Lurigancho and El Callao, on the same days when the Congress of the Socialist International was hosted in the country. From that moment the date of June 19 was assumed by the International Communist Movement as a symbol of the struggle against repression and proletarian solidarity.

The Rome section of the Carc Party celebrated this day on Sunday, June 21 both in the morning at the non-Catholic cemetery in Rome, Testaccio, in front of the tomb of A. Gramsci, founder of the first Communist Party of Italy, and in the afternoon at their headquarters which hosted, among others, a member of the Anti-Imperialist Front to deepen the repression in Turkey against the revolutionary artists of Grup Yorum, the people’s lawyers and revolutionary Turkish prisoners who oppose the fascist regime of Erdoğan. The day ended with a social dinner, music and a projection of Grup Yorum’s 2010 concert at Inonu Stadium in Istanbul.

Long live the resistance of the revolutionary prisoners!
Long live internationalist solidarity!
We are right, we will win!

Grup Yorum Calls For Concert In Istanbul Yenikapı On 9 August