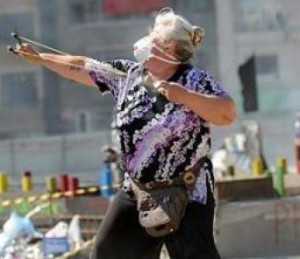 Freedom for Aunt Emine (Emine Cansever)! “Not marginal, not a provocateur but a retired worker.” Emine, an elderly woman, became famous for being photographed firing a slingshot at police when they were cracking down on Gezi Park protests this summer. She has been imprisoned.

Update – it was reported on December 31 that Aunt Emine had been released. 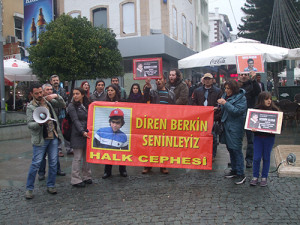 Protests in Antalya and Adana

The People’s Front carried out a protest in Antalya on December 28 in support of Berkin Elvan, a teenager who has been in a coma since being injured by police cracking down on Gezi protests during the summer. The same day a similar protest was held in Adana.

Call for release of trade unionists

An action was held in Ankara on December 28 to call for the release of trade unionists from the public workers’ federation KESK. Most have been in prison for the past 10 months. After the arrest on December 20 of Halil Top, an education union activist in Corum, the number of KESK activists in prison stands at 48.

On December 27 and 28, the People’s Front carried out actions in Gulsuyu, an Istanbul neighbourhood, to oppose organised crime gangs that operate in the neighbourhood with police connivance.

A commemoration by Dev-Genc (Revolutionary Youth) of the December 2000 prison massacre was obstructed by police who used threats and a roadblock in Erzincan, eastern Turkey. Dev-Genc stated that “repression cannot intimidate us”.

Local people held a march in Istanbul’s First of May neighbourhood to oppose government corruption.  They carried a banner with the slogan “Everywhere bribery, everywhere corruption – revolution will clean this filth”.

The Antalya Association of Freedoms held an event on December 29 to mark the coming new year. After a meal the Antalya People’s Front showed a film and then speeches were made. It was stated that 2014 would be a year of popular uprisings.

On December 29 the Karanfiller Culture Association in Bagcilar, Istanbul lit a fire for the people of Van in the mainly Kurdish east of Turkey, who are still recovering from the effects of an earthquake in October 2011. The slogan “the people of Van are not alone”.

An anti-corruption event was held in Dersim, eastern Turkey on December 28. It was organised by the Dersim People’s Committee.  A banner was displayed in the local council conference room, where the event was held, with the words “No to drugs, gambling, drinking dens and cultural corruption in Dersim”.  A meal was eaten and there was also music and dancing. About 200 people took part.