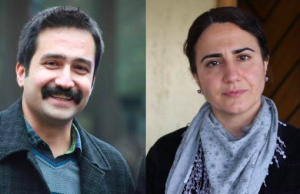 As you know Aytac and Ebru have been transferred to hospital without their will. The lawyers objected to this decision. Unfortunately, some minutes ago, the 38th Assize court denied the request, as already the 37th Assize court did, which made the decision to keep them in prison despite medical report.

This is the second rejection to the objection of lawyers against the 37th Assize Court’s scandalous decision to keep the lawyers Ebru Timtik and Aytaç Ünsal in prison, despite the forensic medical report which confirmed their critical situation and emphasised that their health state isn’t suitable to remain in prison.

The authorities in Turkey obviously want to punish the lawyers for defending political cases as the victims of torture and political murder, civil rights and also rights of workers and subsequently reveal those state crimes in the scope of their legal activities.

The trial against them, which was witnessed and followed by hundreds of jurists on international level and caused big protests for it’s clear violation of all legal principles, ended with 159 years prison for 17 lawyers, ordered by the 37th Assize Court.

The 37th Assize court had replaced a court panel which was removed because it dared to handle the case objectively and ordered the release of all lawyers, directly after the appeal of the prosecutor.
It was made even possible that this court (37th Assize court) worked in the weekend to order the re-arrest of 12 of these lawyers within 10 hours.

The lawyers have become a big danger for the system because they bring to the light what the political power seeks to hide.

And at least in this trial against the most engaged jurists of the country, it has become visible that there is no more separation wanted between the legislature, judicature and the executive in Turkey