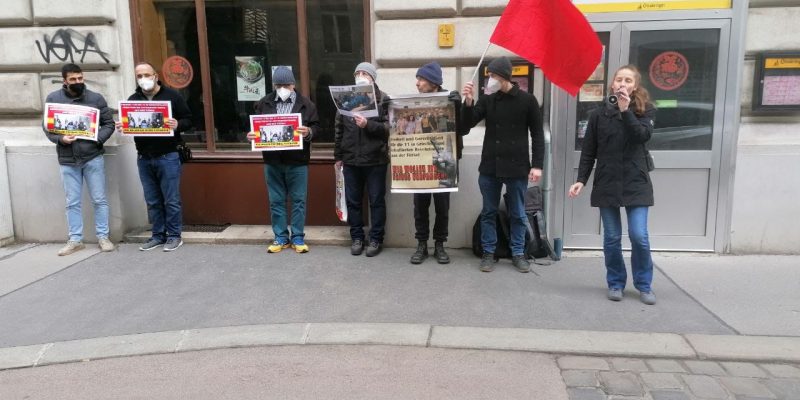 The long march launched for 11 Turkish revolutionaries who were arrested in Greece and sentenced to 333 years in prison continues with actions and activities in Austria on its 21st day.

The program in Austria started with a seminar held in Neustadt, Austrian Alevi Association. In the program held here, it was explained why the Turkish revolutionaries were imprisoned, how they were sentenced to 333 years in prison with a trial game, the obvious irregularities and injustices in the case. In addition, revolutionary prisoner Ali Osman Köse with cancer and the ongoing death fast were discussed. Afterwards, the fiction made for 11 Revolutionaries from Turkey was watched. Then it was on to the question and answer part.

Ali Ercan Gökoğlu, who was imprisoned in Malandrino prison in Greece, also contacted by phone and told about the case and the unlawfulness. He told 11 revolutinaries form Turkey about the freedom campaign and the long march and said that the campaign should be supported.

A total of 40 people attended the seminar.

The Long March was in front of the Embassy in Vienna, Austria, on its 22nd day.

On the 22nd day of the long march, a press statement was made for 11 revolutionaries from Turkey in front of the Greek embassy in Vienna, Austria. In the statement, it was emphasized that the Greek state sentenced 11 revolutionaries from Turkey to 333 years in prison in line with the instructions of the US imperialism and Turkish fascism, and that these unlawful decisions will be fought against.

We Want Justice, We Will Take It

We Want Justice for 11 Revolutionaries from Turkey

Down with Fascism Long Live Our Struggle