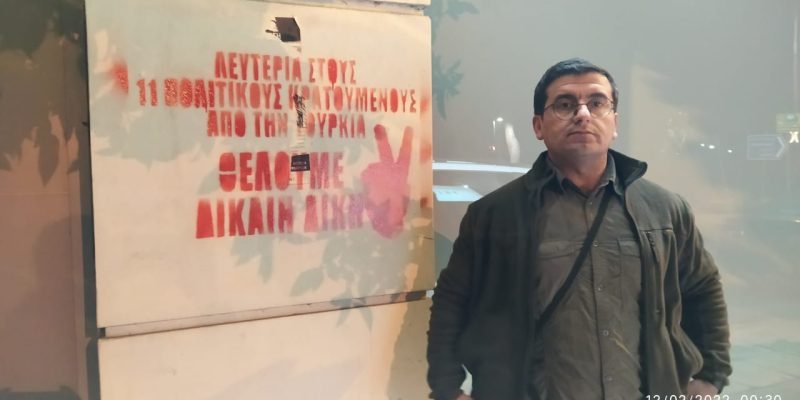 The People’s Front Greece: We Call All Our People to Write for 11 Revolutionaries from Turkey Imprisoned in Greece!

On March 19, 2020, democratic institutions were raided in Greece and 11 revolutionaries from Turkey were arrested. The trial of 11 revolutionaries started on July 2, 2021, about 16 months later, and 11 revolutionaries were sentenced to 333 years in prison. These prison sentences were not based on any evidence. By saying that we only think so, the court accepted staying together in the same house, making a victory sign and shouting slogans as evidence for membership in the organization. This decision is a political decision made in line with the instructions of American imperialism and Turkish Fascism. There is no law in this decision, there is no justice. The Greek state even broke its own laws and made this decision. As the Popular Front of Greece, we declared that we do not recognize this decision. We will continue our struggle until this injustice is eliminated and our comrades are freed. We are expanding the freedom campaign for 11 revolutionaries in Greek prisons, which we have been carrying out for a long time, to eliminate this injustice, with a long march in Europe, with our graffiti in Greece. It is our call to all our people. Let’s demand justice and a fair trial for 11 revolutionaries from Turkey by writing letters wherever we are. Let’s share the pictures of our writings and shoot videos. Let’s defend the legitimacy of the revolutionaries against the efforts of the Greek state, Turkish fascism and American imperialism to portray revolutionism as terrorism.
We Want A Fair Trial

15th Day Of The Long March!

An online meeting was held on July 25 with representatives of Italian feminist associations and ...
By 1917soviet
July 28, 2022
Next Article:
February 12, 2022
min read
Social connect:
or