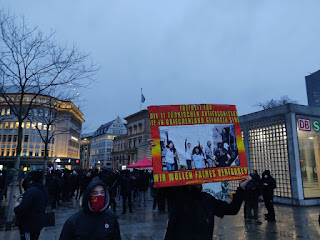 We were in Leipzig, Germany on February 11th. Interviews were given there, a tent action was held, and the German anti-fascists participated in the solidarity action.

At 13:00 in the Connewitz neighborhood of Leipzig, Germany, a tent action was launched for 11 revolutionary prisoners held in Greece. About 15 people participated in the action. Folk songs were played, statements were read.

Towards the end of the action, the police of German imperialism attacked and tried to disperse the mass.

We were in Magdeburg, Germany on the 13th day of our long march.

The People’s Front Greece: We Call All Our People to Write for 11 Revolutionaries from Turkey Imprisoned in Greece!

An online meeting was held on July 25 with representatives of Italian feminist associations and ...
By 1917soviet
July 28, 2022
Next Article:
February 11, 2022
min read
Social connect:
or