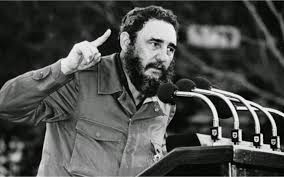 The leader of the Cuban revolution and the people, the beloved Fidel of the entire people, Commandante Fidel Castro Ruz felt martyred today.

We bid farewell to commandante Fidel Castro, who will take his place next to Che and Camillo; at the side of the world’s revolutionary leaders, in the hearts of our people.

Our condolences first of all to the Cuban people and to the entire people! And the imperialists and fascist collaborators should never be delighted, because same as yesterday, Fidel, the beloved Fidel, continues to be the commandante of the people and to be a nightmare for fascist dictatorships and imperialism…

Because Fidel first of all wrote to history that the only liberation for the oppressed entire people is socialism and that the road of liberation comes from the peoples liberation struggle against imperialism and its collaborators, from the armed struggle, and he gave the best proof for that with the Cuban revolution under his leadership… He is our beloved Fidel… The comrade of Che.
And he’s the hopeful smile and unbending attitude of Cuba.

He has been targetted by imperialism and his allies for decades of years, he was subjected to countless assault attempts. Together with Cuba they wanted to force him to capitulation under economical, political, military and diplomatic surrounding, but he did what a revolution leader had to do against that, he left the people his name and practics as a strong example.

And we as the comrades of Mahir and Dayi, as the Islanders of Anatolia call out for you Fidel:
Our promise to you, to Che and all other revolution leaders, we will also continue to struggle all over the world until the victory of socialism has beenn announced. Today the flag of anti-imperialism and internationalism against annihilation, liquidation and capitulation of ideological andpolitical leadership isin our hands. You beloved Fidel, have drawn the picture of happiness in Cuba, just as master Nazim (Hikmet) said… Shall those, who try to destroy this picture think they were successful. We’ll create this picture anew all over the world.