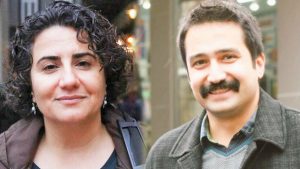 Ebru Timtik and Aytaç Ünsal have left behind day 200 of the death fast resistance they started with the demand of a fair trial. Ebru Timtik has difficulty in breathing due to the wounds in her mouth, it is getting worse day by day. Aytaç Ünsal is experiencing severe pain due to muscle pain in his body.

The AKP Fascism, tts judges, and the 37th ACM (High Criminal Court) disregarded the report given by the Forensic Medicine Institute which stated that they cannot stay in prison and so decided not to release Ebru and Aytaç, but instead kidnapped them to the hospital.

Forced intervention is torture, it is a crime against humanity, they are put in rooms like a single cell in the hospital and they do not turn off the lights, they torture the death fast resisters, physically and psychologically.

We must be a voice for Ebru Timtik and Aytaç Ünsal, we must raise the resistance for their release and make it heard everywhere. 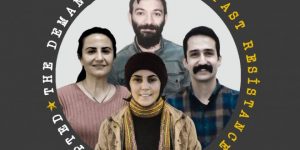 On Mondays and Wednesdays lets protest in front of the Turkish Consulates, lets send fax’s to the ministry of justice and interior, lets do solidarity hunger strikes, lets go to the Let’s go to the European Union Embassies.

Let us call the hospitals where Ebru Timtik and Aytaç Ünsal are held hostage and tell them to end this torture immediately. The pressure created by us will bring us the victory that will magnify the resistance of Ebru and Aytaç. Every action taken has great importance and seriousness. Keeping our fighters alive depends on effort we put in.

This was Solidarity from Antiimperialist Front Austria