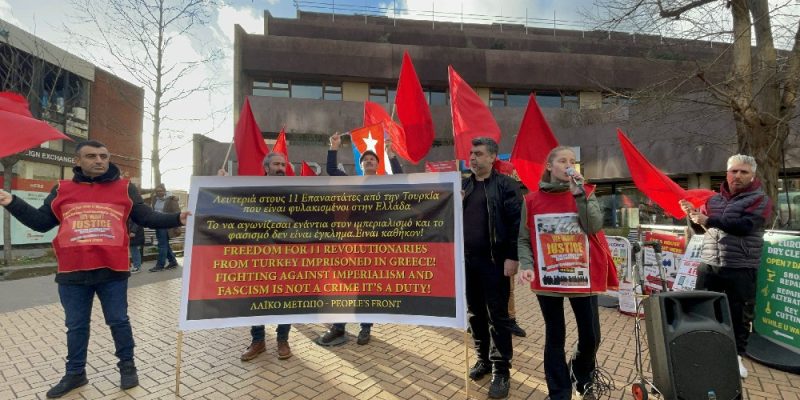 The long march organized by the Committee for Justice reached London on Sunday, February 6, 2022, on its 11th day.

After the events in Ireland, the march’s demand for justice started its activities in England.

After the welcome of our fellow justice marcher, the voice of our 11 revolutionary imprisoned friends, who were unlawfully imprisoned by Greece, was announced to the public with a press release in front of the Wood Green Library, and invitation leaflets were distributed to the panel.

On the evening of the call, a meeting was held at the Pir Sultan Abdal Cultural Center for the panel. 50 people attended the panel, which was held at the call of the People’s Front England.

The purpose of the long march was explained and a call was made to participate in the work to be done to create public opinion for the liberation of 11 revolutionaries who were unlawfully imprisoned in Greece.

Erdal Gökoğlu, who was unlawfully imprisoned in Belgium, attended the panel by phone and talked about the process she lived through and the anti-terror laws and oppression and punishments on the revolutionaries.

The panel was concluded by calling for the Justice Watch to be held in front of the Greek Embassy at 11:00 the next day.