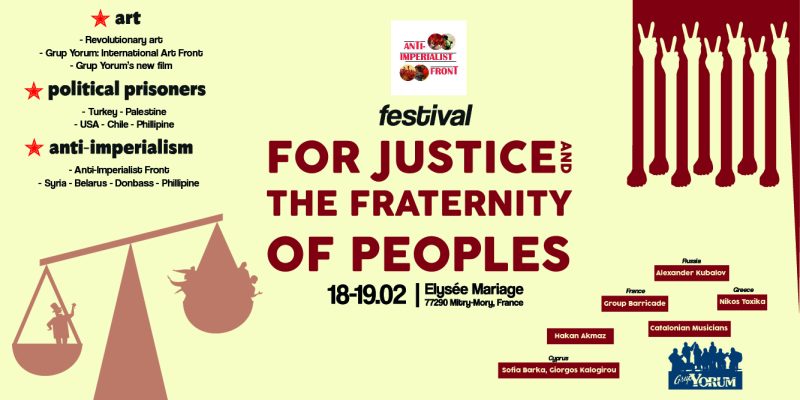 As, Anti-Imperialist Front, we will be organising a two day festival in France on 18/19 February: For Justice and The Fraternity of The Peoples.

On the 18th starting at 12PM, there will be talks about political prisoners all over the globe, revolutionary art, and anti-imperialism. We will be joined by Jalil Muntaqim; ex political prisoner of the Black Panther Party, the Samidoun Network, and the Unitary Campaign for the Liberation of Georges Abdallah.

On the 19th starting at 6PM, a concert will take place with musicians from six different countries. On stage will be the revolutionary band Grup Yorum from Turkey, Group Barricade from France, Alexander Kubalov from Russia, Nikos Toxika from Greece, Hakan Akmaz from Turkey, Sofia Barka and Giorgos Kalogirou from Cyprus, and musicians from Catalonia.

An online meeting was held on July 25 with representatives of Italian feminist associations and ...
By 1917soviet
July 28, 2022
Next Article:
February 14, 2022
min read
Social connect:
or