The statement about Musa Aşoğlu at December 3, 2016 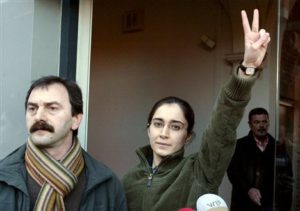 The imperialists will be liable for anything happens to Musa Asoglu!

Imperialism targets revolutionaries, places a price on their heads to kill them or capture in hopes of leaving the peoples without hope. And all imperialist countries and their collaborators, being united in this aim, carried out an operation on the night of December 2 and detained Musa Asoglu.

In 2014 US imperialism put forward a 3 million dollar bounty for capturing Musa Asoglu and two other revolutionaries, presenting them as the leaders of the DHKP-C and saying it was “a reward for justice”. US imperialism started a headhunt throughout the world and under the name of the struggle against terrorism it resorted to medieval methods against revolutionaries to “drive them into a corner”. But those who condemn the peoples of the World to death and hunger while giving every kind of support to gangs like IS or El-Nusra can hardly get the people on their side with such announcements.

But we know that since the only obstacle to the imperialists’ exploitation of the peoples is the revolutionaries, they will not shrink from killing and torturing revolutionaries! Musa Asoglu was detained by the German state and after 1 pm on December 3 there has been no news of him!

Let us not allow imperialism to abduct or torture our comrade Musa Asoglu, who for years has waged the Marxist-Leninist struggle for the freedom of the world’s peoples!

Let us unite against the imperialist policy of killing and abducting revolutionaries.

Imperialism tries to isolate leaders or get them to surrender, tries to put an end to organisations, tries to eliminate morale and motivation among the people. But their reckoning is in vain as they will get no revolutionary to surrender!

Our call to all peoples and organisations is to contact German consulates and  say over and over again, “Where is Musa Asoglu?”

We will demand a reckoning from those who try to get revolutionaries to surrender with a policy of offering rewards and kidnapping.

We refuse to recognise imperialism’s policy of placing prices on heads!

Imperialism will be defeated, peoples that resist will win!

We will not be the victims of imperialism, we will be its executioners!